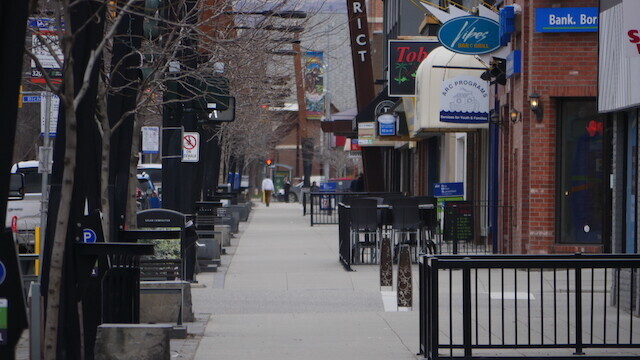 As we await to hear the province’s plan to slowly reopen the B.C. economy, Kelowna city council has a message for residents: support local businesses. Hundreds of local small businesses have been closed for more than a month, either by choice, or by order from provincial health officer Bonnie Henry in an effort to slow down the rate of spread of COVID-19.

Figures released at the beginning of April showed about 2,000 people in the Central Okanagan had been put out of work as a result. Those numbers are expected to rise when new employment numbers are released later this week.  Foot traffic downtown and in other urban areas of the city is a fraction of what is usually is.

But, the message from councillors Monday was clear.

“It’s really easy to go online and buy online if you want something. But, I’d like citizens to remember this. Those sites, some of them…they are not local, some are not B.C. and some are not even Canadian,” said Coun. Maxine DeHart.

“As things are going to open up in a responsible manner, I really want to encourage people to buy local. Support local, buy local as much as you can.”

“I have spoken with a lot of business owners over the last couple of weeks who are struggling with not only lease payments, but just paying their overhead and their bills,” he said.

Coun. Brad Sieben said with the start of a new month came a new round of lease and rent payments and, for some, federal assistance payments have been slow to come in.

“Funding from the federal government has been slow to flow, and I have spoken to many different businesses that are now very concerned on how to make payroll, what June looks like. But, basically trying to hang on through May,” said Sieben.

“It’s kind of like kicking the can down the road a bit for these businesses to defer things, knowing they are going to pop up at some point.

“Hopefully some restrictions are backed off…and as much as we can to support these businesses. It’s affected their business tremendously, and it’s not over yet. People are not going to gravitate…it’s won’t be a wave of a wand and back to normal.”