Hours after B.C. reported its highest-ever six-month total of overdose deaths, hundreds gathered in Kelowna’s Kerry Park on Tuesday evening, Aug. 31, calling for decriminalization and an end to the stigma surrounding substance use.

The event, organized by the Kelowna committee of Moms Stop The Harm (MSTH), coincided with International Overdose Awareness Day. New data from the BC Coroners Service revealed that a total of 1,011 suspected illicit drug toxicity deaths were recorded between January and June 2021, on pace for more than 2,000 this year.

“It’s really tragic. It’s a significant sign that everything we’re doing is not making any difference,” said Helen Jennens, a member of MSTH Kelowna who lost her two sons to drug overdoses.

According to data from BC Coroners Service, Kelowna has the fourth-highest number of fatal overdoses in B.C. over the last 10 years, behind only Vancouver, Surrey and Victoria. Kelowna had a total of 369 deaths caused by illicit drug toxicity from January 2011 to June 30, 2021, 25 of those coming since the beginning of this year.

“The big problem is the toxic market. The drugs are just lethal. Until we stop that, people are gonna continue dying,” said Jennens.

Addiction, she said, is a multilayered issue that has no simple solution.

“It’s going to take a long time. In the meantime, we need a safe supply just to save lives because a dead drug user will never recover. This event is important in telling people that,” she said.

“We need to raise awareness and get rid of the stigma that surrounds substance use. It’s a mental health issue and a medical disorder. People should be treated the same way as anybody else that is ill.”

“I’m mainly here for our son. Three years ago, he overdosed on carfentanil. I just want to give a heartfelt thank you for everyone being here,” said Phillip. “We need people; we need resources like the ones that are here to assist our children.” 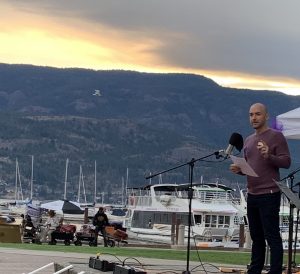 “… People who use substances deserve to be considered with the same weight as those with acute illnesses,” said Wooldridge.

“We have to continue to work towards decriminalization and reducing stigma so that we can continue to support people so that we don’t see tragedies like this in the future.”

Jennens said that the solution to the overdose epidemic is decriminalization and a safe supply.

“It’s a short-term fix and we still need to create systems of recovery and treatment, concurrent care for mental health and substance use,” she said.

She added that she hopes that people walked away from the event with a sense of compassion.

“These people don’t deserve to die … Understanding that these moms here have lost a child,” she said.