Letters of support for a three-tower downtown development cited issues with homeless population in the Leon area. 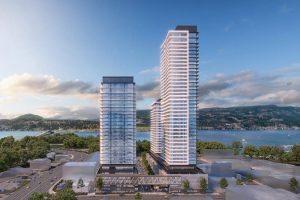 Letters submitted by local businesses in support of a massive Leon Avenue mega-condo prompted concern for a Kelowna city councillor.

The three-tower development, dubbed Water Street by the Park, is set to be a near-complete revitalization of the 200-block of Leon Avenue — an area that has long been the subject of community debate due to the street’s significant traffic of people experiencing homelessness.

Social issues facing the area were cited in four letters of support given to the developer by neighbouring businesses and area stakeholders. They were presented as council considered the development at a Tuesday evening (Jan. 12) meeting.

During that meeting, Coun. Loyal Wooldridge said the letters, submitted by Hotel Zed, Prestige Hotels, Global Okanagan and the August Family Foundation, “suggest gentrification like this is going to solve those social challenges.”

“It’s a misconception when we build luxury towers that gentrification is going to solve the lack of investment into treatment and support services, and most importantly housing,” Wooldridge told the Capital News.

In the letter of support from Hotel Zed, president and CEO Mandy Farmer stated the hotel believes the development will help the street be “reclaimed for locals.”

“[City Park] has been a home for drug use, homelessness, thievery and a general unpleasant behaviour that takes away from the [residents] and tourists of our city. I believe it is time to take back our streets and park and allow them to be fully appreciated and used by our community,” she wrote.

Despite their new neighbours, Kelowna’s Gospel Mission will continue its operations on the street — that includes offering beds, meals and social services to people experiencing homelessness. Neither the mission nor the people it serves have plans to leave the area.

“Any neighbour that comes into town that increases our property value is something that we will welcome.”

The intention of the development is obviously not to solve social issues, said developer Anthony Beyrouti, but will rather enhance and bring life to the area. In response to Wooldridge’s comments, he said the word ‘gentrification’ is used “whenever something new is built.”

“I don’t think it’s a derogatory term,” he said, citing Wooldridge’s eventual support of the project. “He wouldn’t have given his approval if he thought it was a bad thing.

“Basically every project has things it could work on, but we’re trying to do something spectacular in an area that a lot of people believe need it.”

Wooldridge — along with most of his fellow councillors — was wooed by the chance for a long-awaited revitalization of a street that has had very little interest from developers. City council hesitantly approved the project with a 7–2 vote that followed much deliberation, largely stating the “much-needed” redevelopment of Leon Avenue outweighed their significant concerns.

“I don’t think the application is perfect by any means,” Wooldridge said. “But this is one of the first times we’ve had someone come forward with a vision and a substantial amount of investment to address what needs to be upgraded.”