CBC’s The Doc Project: How a B.C. library’s Drag Queen Story Hour turned into a nationwide fight for intellectual freedom 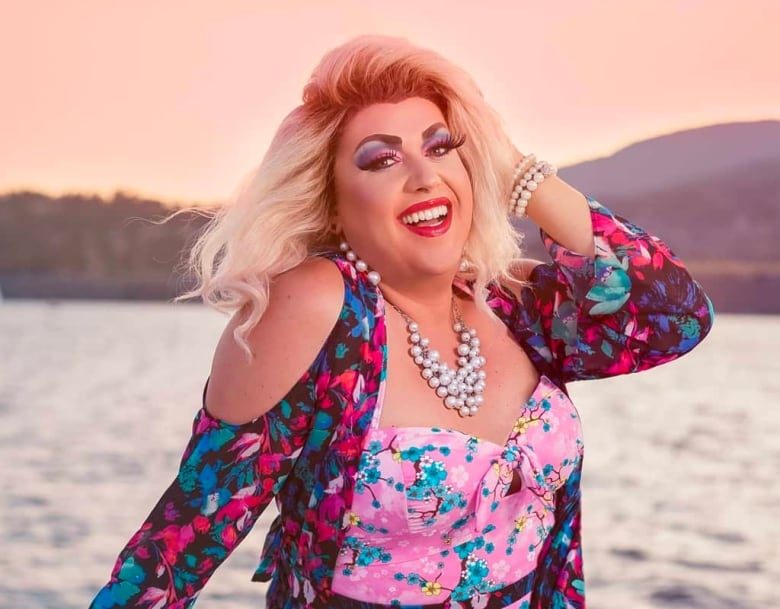 When Miss Freida Whales stepped into the Okanagan Regional Library (ORL) last September, she was not prepared for the crowd waiting for the inaugural Drag Queen Story Hour.

“I remember coming through the doors. I was wearing my blue wig with my unicorn pony dress,” Miss Whales, played by Tyson Cook, recalled. “We finished setting up and the crowd grew and grew.”

Despite the event’s success, when the ORL invited Cook to read stories to kids during its storytime hour, it provoked pushback from many Kelowna residents. Following the first DQSH, an ideological battle broke out between the library board, librarians, drag queens, politicians, and parents, forcing the community to reassess the role of libraries and where drag queens fit into such public spaces.

How about a Drag Queen Story Hour?

Drag Queen Story Hour (DQSH) got its start in San Francisco half a decade ago, but it would be a first for the ORL.

Ashley Machum, the youth services’ librarian at the downtown Kelowna branch of the ORL proposed hosting a DQSH after a chance encounter with Cook, a certified educational assistant who works with children with disabilities.

“At the conclusion of one of my class visits, [Cook] came up and said, ‘Have you ever considered doing drag story time at the library?'” Machum recalled. But she didn’t know anyone who did drag.

Cook told her that he was a drag queen, who went by the name Miss Freida Whales, the Okanagan Orca and the Queen of the Seas of Kelowna, and did story time. Intrigued by the possibilities, Machum proposed they meet again to discuss further. They continued exploring the idea throughout last summer. 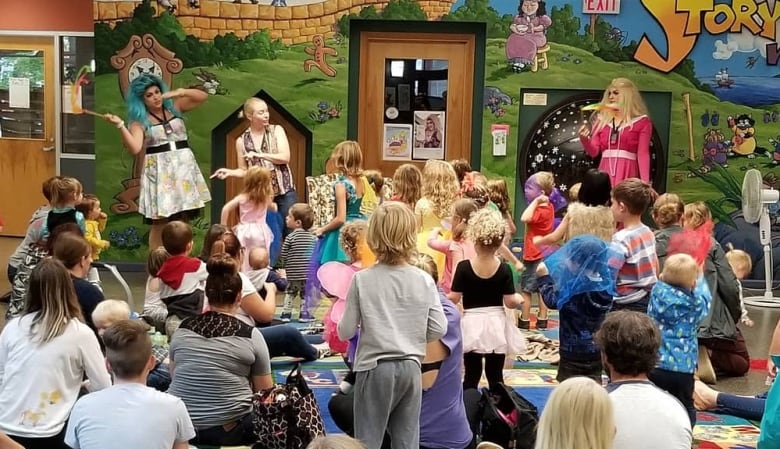 When Machum proposed the idea to Chris Stephenson, the head librarian at the ORL’s downtown Kelowna branch, he wanted to think it through.

“I took the night to think it over,” he recalled. “And it really came down to just expecting some pushback. We didn’t know what that would look like.”

Despite anticipating pushback, they decided to move forward with the event because it was “fresh” and “engaging,” according to Stephenson.

“It’s a no-brainer that kids and their families really love this stuff,” he said.

Machum explained that it was also “nice to shake things up once in a while.”

They decided to hold two events in the fall and began promoting it in early September of last year. As Stephenson predicted, the library started receiving pushback online, especially in the lead-up to the first event.

It comes down to education and a lot of the statements that were being made were very inflammatory. It deserves to be called out, brought into the light.– Loyal Wooldridge

“Some comments referred to drag as being grooming for pedophilia,” recalled Machum, “that the library is not a place for this sort of person, that kind of thing.” 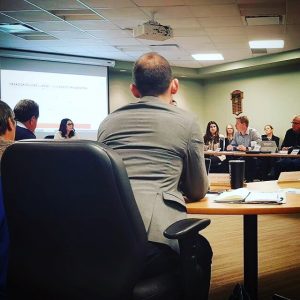 Loyal at the ORL September board meeting.

The negative sentiments caught the attention of Loyal Wooldridge, a city councillor and an ORL board trustee board.

“I was actually considering bringing it forward as a trustee item in the open portion of our September meeting,” Wooldridge said. “It comes down to education and a lot of the statements that were being made were very inflammatory. It deserves to be called out, brought into the light and not just allowed to lurk in the darkness of social media.”

Despite the pushback, the first DQSH went smoothly with over 160 attendees. The room was filled with children, some in costumes, sitting on the floor next to their parents or on their feet singing and dancing along with Miss Freida Whales.

“This was the most attended event at the library that I have ever seen,” recalled Cynthia Gunsinger, who attended with her husband and toddler.

“There was zero backlash, zero protesters, zero negative comments at the event,” Machum said. “Just a community coming together and showing love. My heart could have exploded that day.”

That glow was short-lived. Despite the event’s success, the negative feedback continued on social media. When the library’s management team asked why the branch hadn’t provided more notice for the event, it set off alarm bells for Machum and Stephenson.

Then they learned about a memo from ORL CEO Don Nettleton in which he called the event “controversial” and “potentially divisive.”

“The announced program, while claiming to be promoting diversity and acceptance, will be offensive to a significant segment of our society,” he said in the memo.

At the time, Nettleton said he was also concerned the library could lose its reputation as a “middle of the road” or “neutral” safe environment for children’s programming and suggested implementing a policy for “controversial” programming so that staff would have something to refer to in the future. Nettleton could not be reached by The Doc Project  for comment.

The memo, posted on the ORL’s website, attracted both positive and negative feedback from the Kelowna community and the issue drew attention from libraries across Canada.

“Their responses were amazing. They took the memo to task,” Machum said of the libraries.

If I thought the first Drag Queen Storytime was amazing, this was a hundred times even more amazing. It was just so empowering, so successful and so uplifting.– Ashley Machum

Wooldridge was also upset, but refrained from reacting out of anger.

“I wanted to ensure that there was a thoughtful methodology behind how this would be approached with the board,” said Wooldridge. “My plan heading in was to honestly just share my personal story with the board because I’m the only person that is openly gay.”

According to the memo, the second DQSH was permitted to proceed because it was already advertised. Determined to host the best event possible and give naysayers no excuse, Machum and Cook planned every detail and rehearsed. The payoff was beyond her expectations. 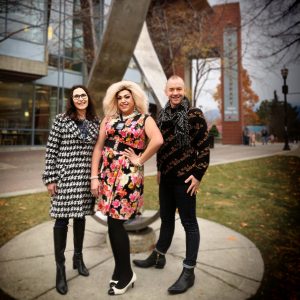 “If I thought the first Drag Queen Storytime was amazing, this was a hundred times even more amazing,” she said. “It was just so empowering, so successful and so uplifting.”

Four days later, the library board reconvened and released a statement with a list of recommendations.

The recommendations included a review of the board’s future correspondence and sensitivity training for Nettleton and all senior staff members. The statement also noted that it wasn’t the role of the library board to make decisions about programming in any community. Each recommendation was voted on and passed without opposition.

“Don Nettleton did send out an apology email to the staff and supported the fact that he had come to see that he trusts our judgment. That meant a lot,” said Stephenson.

In an email, Michal Utko, the Director of Marketing and Communications at the ORL confirmed that the diversity and inclusivity training was conducted between Dec. 12 and 18, 2019 by Patrick Doyle and Associates.

We do really professionally take our oath — it’s not really an oath — to provide that information and intellectual freedom to everybody.– Ashley Machum

A place for ‘original, sometimes unorthodox and critical ideas’

There have been no other DQSHs since last November. Pandemic aside, according to Stephenson, the ORL currently doesn’t have the resources and has no immediate plans to host more such story hours. In March, Cook hosted an independent Digital Drag Story Hour as Miss Freida Whales and plans to host more DQSHs in the future.

In June, Machum and Stephenson were awarded the B.C. Library Association’s Champion of Intellectual Freedom Award in an online ceremony.

“I was shocked,” said Machum.

“The award capped it off because it just said, ‘We recognize what you’re doing up there in the Okanagan. It’s good stuff. And the power of personal choice is part of intellectual freedom. So good on you for giving that access to your community,'” said Stephenson.

“We do really professionally take our oath — it’s not really an oath — to provide that information and intellectual freedom to everybody. It really woke up the Okanagan Regional Library staff and librarians to protect that,” said Machum.

That “oath” is also reflected in the board’s policy, which states that one function of the ORL is to “provide a place where enquiring minds may encounter the original, sometimes unorthodox and critical ideas so necessary as correctives and stimulants in a society that depends for its survival on free competition of ideas.”

“Pertinent that it was written on February 14th. It’s like a love letter to what we believe in as librarians in many ways,” said Stephenson.

Kevin Ball is a radio producer, currently with CBC’s The Doc Project. When he’s not making radio, he enjoys just making noise with loud things like bagpipes and motorbikes.

This documentary was edited by Alison Cook and Jennifer Warren, with Acey Rowe.