A call for Mental Health Supports for Residents & RCMP

Cries of “Justice for Mona” and “No police brutality” rang out across Kelowna’s Stuart Park Saturday afternoon as more than 60 people gathered to support Mona Wang at one of four rallies held simultaneously across B.C.

On Jan. 20, RCMP Const. Lacey Browning was conducting a wellness check on Wang, a UBC Okanagan nursing student. Surveillance video footage shows Browning dragging Wang down a hallway, pulling on her hair and stepping on her head.

“What we saw on the video tape is wrong,” said Shui Lee, a frontline health-care worker and one of the organizers of the Kelowna event.

”We want everybody to know that. We want change. We don’t want it to happen again.”  Lee said it was important to support Wang, also as a health-care worker.

“What happened to her could happen to us,” he said, noting the pressure health-care workers have been experiencing has been heightened during the COVID-19 pandemic.

While Lee wants to see changes in the 45-year old Police Act, he said not all police are bad.

“They put their life on the front line to protect our family, our city, our community every day,” he said.  Lee is hoping police can learn how to handle mental-health patients in the future, noting they are different than criminals.

Eve H., a student from UBCO who was familiar with Wang, spoke about defunding police and reallocating the funds to proper response teams.

“We need people who care about our health to respond to crises,” she said, claiming that police are part of a corrupt system intended to debase human lives.

“We’re not talking about removing old episodes of the Golden Girls or repackaging cake mix. These protests aren’t about that,” she said. “We want people to stop being discriminated against, beaten and killed.”

Rally participant Wendy Glazier said while she wanted to be respectful of COVID-19 restrictions, she felt the issue was too important not to show up.

“I think we would all like to know that if we were in trouble, we could call and be helped, not possibly hurt or traumatized in the process,” said Kathy Turner, who came to show her support for safe, secure mental-health checks. 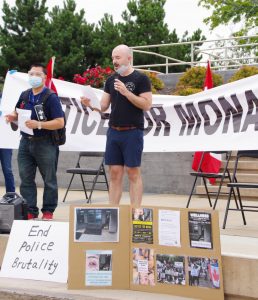 Turner, who said she has a family member unjustifiably roughed up by an RCMP at a minor traffic situation, said she’s concerned about what she has seen in the news about the RCMP.

“I think it would be time to have a look at how we’re doing things and see if we can’t make some improvements,” she said.

Kelowna City Coun. Loyal Wooldridge was at the rally, along with Coun. Mohini Singh and Peachland Mayor Cindy Fortin.

“The behaviour that we saw in the video is unacceptable,” said Wooldridge, noting the continual underfunding of mental-health and substance use services

Wooldridge spoke of the creation of a multi-agency integrated crisis intervention response that supports individuals and first responders.

While mental-health funding falls under the health authority, Wooldridge said it’s important all agencies and all levels of government come together to discuss the specific needs of the community.

Following the speeches in Stuart Park, several of the rally participants lined Water Street chanting and holding up their signs for passing vehicles.